Read Whispers of the Wind on Wattpad for FREE!

And since you’re here, which cover style do you like better?

What Is ‘Whispers Of The Wind’ About?

Seventeen-year-old Robb is the king of Zeruko. He, and his twin sister Myra, ascended the throne after their father’s passing. According to many, King Daemon-arch-nemesis and ruler of Tentazoa-murdered the late king. But despite the claims, Robb believes his father is still alive.

With a desire to bring his father home, Robb leaves Zeruko with his trusted friend Spion. The pair travel to the realms of the universe through the magic of raindrops. From the hazardous trip behind enemy lines to the festive East Asian-esque Meihua; from the kingdom hovering above the clouds to the heterogeneous society of a tunneled realm, every step in his journey uncovers a gem of his past, present, and future. And in one foresight, Robb learns the daunting fate of Zeruko.

I’ve been on Wattpad for a while now, but I’ve never really paid much attention to the platform. As building a Wattpad readership requires as much effort as a blog, I chose to spend my resources here. That being said, you will find my short stories on Wattpad too as I compile and upload them yearly. Which brings me to my YA fantasy series.

While I’m in a limbo on what to do next—pulling Book 1 off Swoonreads, and contemplating between the publisher, agent, or the self-publishing route—I didn’t want to keep the series from you. After all, it has been a while since I’ve announced of another book. Hence, Whispers of the Wind is now available on Wattpad.

By publishing the chapters on Wattpad, I hope to generate more conversations about the novel with you. The platform allows for comments at every paragraph and chapter, giving me better insights on what you think about the story. Wattpad also creates a space for us to have conversations outside of the books—a great way for me to connect with you on a more personal level. So, if you’d like to embark on this adventure with me, head over to Wattpad now! I’m really hoping to see you on the other side.

Note: You’ll find the first 3 chapters of the book on Wattpad. Fret not, the subsequent chapters will be published every Saturday starting November.

I started the 3 Words 1 Story challenge in 2016, writing a total of 10 stories from the random words you provided. This year, I continued with the challenge – I’ve written 11 stories so far, and I plan to end the year with a final piece in December. Knowing how much the writing challenge has helped me – in my creativity and skill – I intend to go for a third season. But before I enter the new year, I require your assistance.

Truthfully, there’s no fun or challenge when I give myself a writing prompt. In fact, it defeats the purpose of the writing challenge. So while I plan for a new year of blogging and storytelling, I’m rallying you – in this rather random and boring blog post – to leave a collection of three random words in the comment section below. 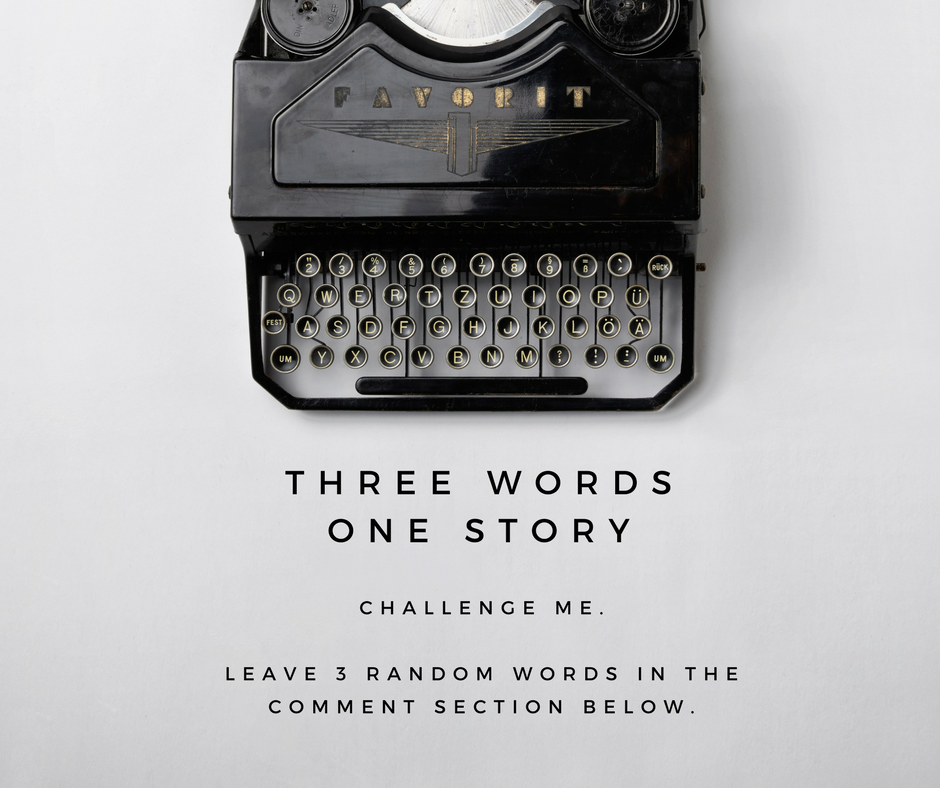 Here are some prompts to help you choose three random words:

1. What did you eat for dinner?
2. Look up the synonym of a common adjective.
3. If you were a superhero, what would your superpower be?
4. A word you heard that you’re too lazy to Google for its definition.
5. What is one thing you’d hate to receive as a gift?
6. An obscure word you found while flipping through the dictionary.
7. The first thing you see when you look to your left.
8. A place where you can be yourself.
9. How are you feeling today?

Do you have three words in mind? Leave a comment! No, leave two comments! Or, if you’re feeling it, answer all nine questions and leave three comments! I thank you in advance for your helpful and totally ‘random’ words. Hopefully, with your assistance, there’ll be enough comments to choose 12 sets of words before 2018 begins. Then, we can run this challenge together in the coming year. That would be way more fun, don’t you think? So let’s do this!

If you’d like to read the stories in the 3 Words 1 Story challenge, you can visit its dedicated blog page. But if you prefer a ‘book’ format, head over to Wattpad – the 2016 stories were published as a collection, and the 2017 collection will be released once the final story is written.