It caught Tom by surprise as his wand flew out of his hand. Disarmed, Joanna walked towards him as Tom backed up, reaching for his wand.

“Let me see it and I won’t hurt you,” Joanna calmly said as Tom picked his wand up.

“Funny, I was about to say the same thing.” Tom smirked.

“Oh? Let’s see you try.” Joanna wasn’t sure what she had asked for, but her adrenaline was rushing and it was the excitement she didn’t have for quite some time now.

“I would, but I don’t think you’re a match at all. It’ll be rather mean to pick on a weaker student, wouldn’t it?”

“The only difference is that I’m not Malfoy. And you don’t know what I’m capable of.”

“And YOU don’t know what I’m capable of,” Joanna replied. She felt as though she was talking to herself, who was typically the only one who actually stood up to her.

Joanna thought briefly about waking up the Professors, but she immediately brushed the thought aside. She wasn’t going to give up the chance to prove this boy wrong.

“Incarcerous!” A bright yellow light escaped Joanna’s wand and the moment it hit Tom, ropes twisted around his body.

“Incendio!” Tom quickly said and the ropes were set on fire just before they could tighten around him. Within seconds, they disintegrated, with its ashes collecting on the ground in a circle around him.

“My turn. Impedimenta!” Tom waved his wand at her.

Tom didn’t wait as he threw another spell. “Stupefy!”

“Protego.” Joanna defended again. He gave her no chance for an offense.

Joanna dodge the last spell as it hit a nearby door, shattering it into a million pieces and sending splinters everywhere.

“Did you just try to blow me up?!” Joanna yelled.

Just before she could throw a spell at him, she heard footsteps. And when their eyes met in the brief moment of panic, he waved for her to follow him.

They ran down a hallway and entered the first door they saw. It was a small, cramped up store room. 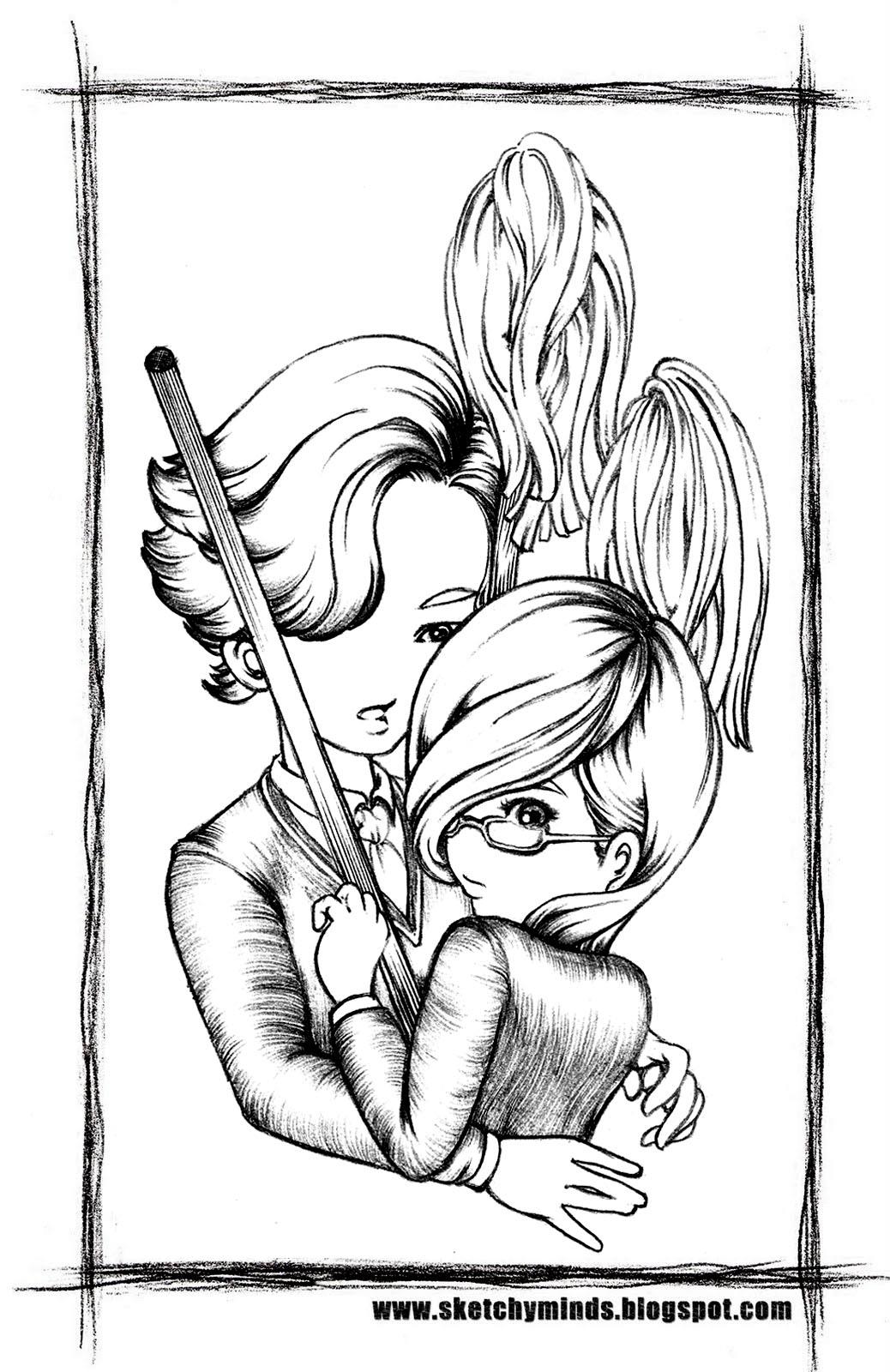 “Great,” Joanna muttered under her breath. She was about to say something else when Tom placed his hand over her mouth.

His perfect timing saved them from being caught as the sound of footsteps were accompanied by shadows, passed by the store room.

But after the shadows were gone and the sound of footsteps died off, Joanna blurted out, “You tried to blow me up!”

“Yes, I was pretty aware of that.”

“I could have died!” Joanna continued.

“You look very much alive to me.” Tom shrugged as he exited the store room.

“What were you thinking?” Joanna followed after him, lowering her voice.

“I was thinking of blowing you up,” Tom answered bluntly and started walking.

Joanna, unsatisfied with his answers, followed after him. And when she gave his arm a sudden tug, the book fell onto the floor. Fortunately, she reached for it before he did.

“Goodnight,” Joanna said as she quickly walked in the opposite direction.

“Wait, we can read it together,” Tom called out to her softly.

“I’ll read it alone,” Joanna said and tried her very best to disapparate correctly this time.

It must have somehow worked as she landed on her back in the Hufflepuff common room. She quickly got up and checked if she had any missing limbs, and to her surprise, she was still intact.

The common room was quiet and empty. Everyone was pretty much asleep and Joanna saw no harm in reading the book right there and then. With that, she settled down on a couch by the fire place and started reading.

She had finished the book pretty quickly and had a full hour of sleep before she had to clean up and head to the great hall for breakfast.

That morning, Joanna tucked the book under her cloak and followed Annoria to the great hall. Annoria, who kept hassling for a reason why Joanna wasn’t in bed last night, kept a suspicious expression throughout breakfast. But that didn’t bother Joanna much.

Breakfast ended with Tom no where in sight. Joanna was half glad she didn’t see him, but he was only missing at breakfast because during Charms, he turned up and sat right next to her.

“It’s with me,” Joanna replied, eyes still fixed on the Professor in front.

“If you don’t mind me asking, why do you want to make a Horcrux?” Joanna boldly asked.

“It’s none of your business.”

“My uncle died trying,” Joanna said as she leaned forward, looking attentive to the lecture.

“Your family… are into the dark arts?” There was a hint of interest in Tom’s voice.

“My mother’s side of the family, but most of them are dead anyways,” Joanna casually answered, as though it was no big deal.

“Well then, if you could be so kind to hand me the book, I would greatly appreciate it.”

Joanna hesitated. Her aunts and uncles were mostly dead or about to die. The dark arts messed them up pretty good and Joanna wasn’t sure if she should give Tom the book. He could die. And it wasn’t magic a 16 year old should be playing around with.

(Leave a comment below or vote on whether Joanna should give the book to Tom, or attempt to destroy it!)